Making difference in the life of children

Making difference in the life of children

Building for the Future Generation is a charitable organization registered under the social welfare in Agona Swedru which Saint Germain School and Young and Lonely Foundation (YLF) serve as consultant organization that assists them in their day to day activities. The main goal of this organization is to build or renovate schools in deprived areas and seek to the well being of the vulnerable children in the communities. The minor aim is to enhance the physical, emotional and psychological welfare of children through entertainment, food support, and also promoting social awareness like HIV and Malaria.
Most children were invited from various orphanage homes, and deprived communities .The party was held on 13th of December 2014 at Ahenfie spot.The main goal for the project was to give the children a taste of Christmas by introducing them to Santa Clause, a Christmas tree and give out presents, and also provides a good atmosphere for children from different orphanage or vulnerable and to let them interact with each other through games and other activities.
Mr. .Jerry Emmanuel Nkrumah the Chief Executive Director for the foundation (Building for the Future Generation) address the gathering by first acknowledging the present of some dignitaries and other organization including YLF. He showed a sincerely gratitude to YLF for their support and partnership and he said a big thanks to all the German Volunteers for their time and money which was used to support the program. He said, it has always been his dream of putting smiles on the face of children more especially the helpless ones (vulnerable children). He added that, he feels deeply sorry for unprivileged children and he is hoping some day he can put a smiles on the face of such children. He advise the children to take their studies serious and learn hard to achieve their goals in life for he strongly believe that life is not where you are but rather whom you are can determined who you want to be. He also used the platform to make all the participant on the awareness of Malaria and HIV/AIDs and the measures to put in place which will help one to prevent himself from contradicting such diseases .After a lengthy speech, he made all the children present themselves for gift. Activities for the occasion was eating and drinking competition, dancing competition, exhibiting traditional dancing and some many entertainment programs.

The social Welfare Director for Agona West District was the chairman for the occasion. He said, he really appreciates the effort most NGOs are putting up to for the wellbeing of the children. He congratulated the host NGOs for their good work and all other NGOs present. He use used the platform to acknowledge YLF for making children and women’s welfare their priority.

There was another get to gather party for all the YLF children the following day at YLF home. This get together was organised to show their sincere gratitude to all people who seek to the welfare of the children. This made some of the children to write poem of appreciation and good will massages to all partners who has devoted their time and resources for the well being. The children said a big thank you to Mr. Gilbert Germain, the Executive Director for the foundation, Madam Dorothy Eghan the Proprietress for St. Germain School Complex and other local volunteers for their good work done and their dedication as responsible parent. They also express the profound gratitude to all the foreign volunteers more especially Lawrenza from Australia, Adam Morgan from U.S.A, Tomoko from Japan, Mr. Shaifur Rahman / Shaheen and their family from Sweden, Eva Handmark from Sweden, Alixia Leblay from France, Luzie Schmidt Fisher Josefine,Tim Pauls, Anna Brel, Kamil, Sophia Schluter, Paul Munnich from Germany and all who have been here to support.
Mr. Germain the Executive Director was very much happy about how the children shown appreciation to the support given to them ensuring their smooth well being. He encouraged the children to always have hope and never give up, for our tomorrow will be a better place. He said, they should strengthen their faith and move on in life and nature will always bring them what they want and what they are destined to be. Life is not easy but nothing can be change unless they determine to make a change for themselves and that makes the change of the world for they are the future leaders. He presented some gift to the best student for the year among the children and the most discipline child to motivate the rest to put up a good behaviour and to take their learning serious. He urged them all to focus in life and always show respect in whatever they do for discipline is the key to success. 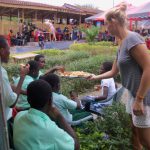 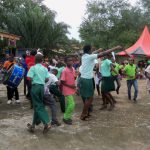 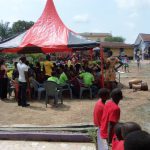 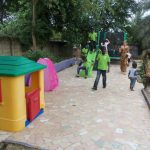 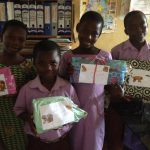 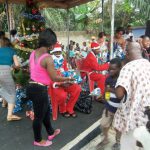 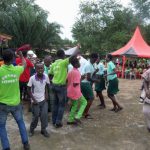 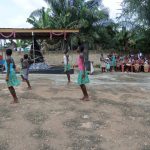 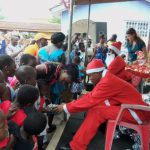 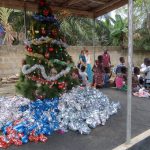 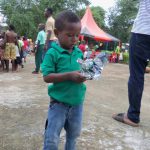 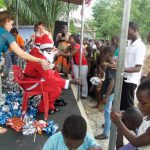 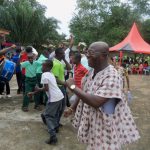 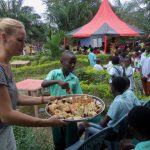 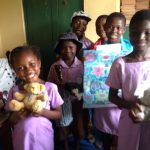 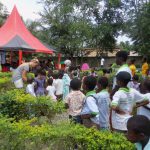 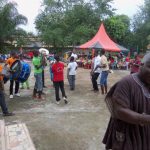 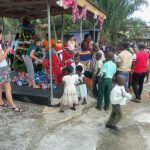 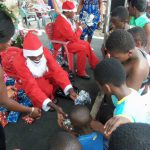